Jenny Black Wolf, a civilian scientist and tracker, and Curran TaZarin, the Defender’s Deniban First Officer, set out on what should have been a routine mission to Caldera to locate and rescue the passenger and crew of the military transport Orion.

Caldera is a barely explored, volcanically active planet, located deep inside Alliance territory. Now the Orion’s crew has disappeared into the Calderan wilderness, and there are Karghan marines on Caldera. They’ve torn the Orion apart looking for what they came for, didn’t find it, and have started hunting the Orion’s crew.

As Jenny and Curran enter the Hell’s Gate Lava Beds to begin their search, a deep but unintended psychic bond begins to form between them—a dangerous mind-link that neither of them wants. Now, the secrets each of them carry could destroy the mission. The secret the Orion is carrying could destroy worlds.

Devastated by the deaths of his entire combat team on a covert mission to Thaetar, Curran TaZarin, the Defender’s Deniban first officer, begins a desperate journey to find a way to heal himself.

Still recovering from his wounds, he keeps a promise he made months earlier and uses his leave to visit Jenny Black Wolf. He and Jenny share a mind-link, but one that neither of them had intended or wanted. Now they must decide whether to stay together or let the bond fade into nonexistence. The bond is a source of intimacy and connection between them, but of danger as well, and they both know they can’t continue as they are without coming to a decision. However, his visit isn’t enough to stop Curran’s pain or resolve their problems.

Desolated, Curran returns to his homeworld without leave. Without his knowledge, Jenny follows him there, into a world of ancient ritual, mystical awareness, and ancestral memory in a desperate attempt to find him before the path he’s chosen takes his life.

The ancient makonen forests on Caracor are dying. No one knows why, and now someone has tried to kill Jenny Black Wolf because she may have come too close to finding out.

The changes Jenny has reported seeing are starting to reveal the true extent of the damage. Each change has led to another and then another, rippling through the entire forest ecosystem until together, they’ve become an avalanche of changes with no one knowing how far it can go before the forests can never recover.

Jenny has been on the run for weeks. Now she’s decided to stop running, take a stand, and return to Caracor. She sends a desperate letter to her estranged bondmate, Curran TaZarin, the Defender’s First Officer, begging him and their friend David Rawlins to meet her at Starbase Fourteen before they each begin their leave.

Jenny and Curran’s relationship is all but over. The mind-link they share is as vibrant and intense as ever, but the last time they met, they became shal’ tan together. This is the last chance they have to salvage their relationship. It may also be the last chance for the makonen forests and the extraordinary diversity of life they protect.

Jenny Black Wolf returns to Deniba, a married woman, living with her husband’s family and teaching at the Institute of Forestry in Shirraz’At. Two years earlier, Jenny had gone to Shaia, a Master Teacher of the Arak’Kaz, and asked him to grant her secret knowledge held by only a few masters and never revealed to outsiders. His answers had given her the power to save her husband’s life, but they came at a price, and she’d promised to pay it.

Jenny’s been off-world for over a year and back for two months, but still hasn’t overcome her fear and gone to see him, knowing that whatever he asks of her, it will be a Warrior’s task, and she will accept it at the risk of her life. Yet when she finally sees him, all he asks her to do is read.

“You can start with this,” he said as he laid Charik’s The Warrior’s Way on the table in front of her. “When you’ve read Charik, read Rawlian. Then we’ll talk.”

Now, the ancient well at the center of the old city has been desecrated, and her Thaetan friend Brashon and the others at the seemingly unimportant archeological site where Jenny goes to visit him have discovered an astonishing cultural treasure that hasn’t been seen in generations.

Long-standing cultural tensions, distant historical events, and ancient ancestral memories are all coming together in a combustible mix with Jenny at the center. The spark that will ignite it is about to fall and the wind that will carry the flames is rising. 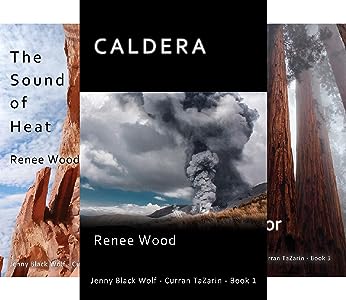